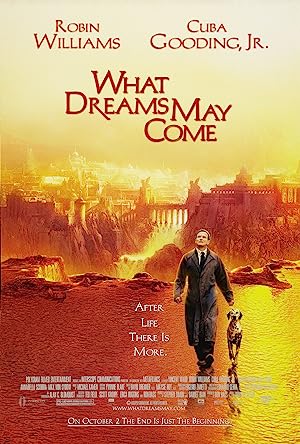 During a holidays in Switzerland, a young Chris Nielsen meets by chance Annie Collins in a lake when their boats slightly collide. Sharing a snack when they meet a few hours later, Chris and Annie fall in love each other. Marrying quickly, Chris works as pediatrician and Annie as artist painter and art dealer, and they turn in parents of two children, older Ian and elder Marie. But their happy family life torn apart when being Ian and Marie teenagers, a car accident kills both and the nanny who was driving the van where they were. Four years later, Chris and Annie try to restore their life despite the tragedy and celebrate their anniversary when while he returns to home in his car after to end his daily work, Chris witnesses a car accident in a tunnel during a rainy night. Exiting of the car in an attempt to help people, another car crashes against him, hurting severally. Dying in the hospital, Chris turns in a ghost around his house and his recently widowed Annie, trying tell her that he still existing and that he still loving her, but his efforts cause more pain in Annie, and Chris decides leave her. Traveling Afterlife, Chris wakes up in Heaven, where he meets Albert Lewis, his former mentor during his medical practices. While Albert helps Chris to adapt to his new existence knowing places of Heaven and meeting again with Marie, Annie falls in dementia and depression, tormented by the remember of her husband and children all died in accidents. Unable to resist the suffering, Annie commits suicide, and Albert returns to Chris to explain him not only Annie's death, but that the suicides go to Hell. Determined to save Annie, Chris decide travels Hell to find her, and Albert takes Chris to the Great Library to find The Tracker, who guides them to Hell's gate. According the travel advances, Chris' memories of several moments of his life with Ian and Annie put in danger the subject of the mission, making harder connect with the own Annie. Making a discovery about Albert's true identity, The Tracker splits them and they two go into Hell as the only one chance to locate Annie. But when finally they find her, Chris' memories of his life with Annie and the situation of the own Annie will make Chris question the success of the travel, having to take a decision that it can change everything forever. Written by Chockys