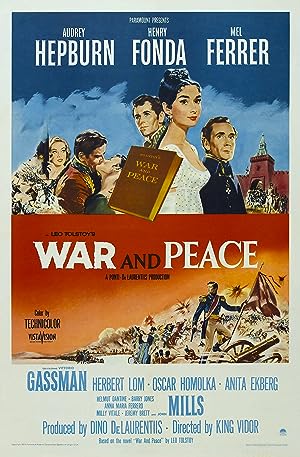 By 1812, Napoleon's (Herbert Lom's) forces controlled much of Europe. Russia, one of the few countries still unconquered, prepares to face Napoleon's troops together with Austria. Amongst the Russian soldiers, are Count Nikolai Rostov (Jeremy Brett) and Prince Andrei Bolkonsky (Mel Ferrer). Count Pierre Bezukhov (Henry Fonda), a friend of Andrei's, and self-styled intellectual, who is not interested in fighting. Pierre's life changes when his father dies, leaving him a vast inheritance. He is attracted to Natasha Rostov (Audrey Hepburn), Nikolai's sister, but she is too young, so he gives in to baser desires and marries the shallow, manipulative Princess Helene (Anita Ekberg). The marriage ends when Pierre discovers his wife's true nature. Andrei is captured and later released by the French, and returns home only to watch his wife die in childbirth. A few months later, Pierre and Andrei meet again. Andrei sees Natasha and falls in love, but his father will only permit the marriage if they postpone it for one year until Natasha turns seventeen. While Andrei is away on a military mission, Natasha is drawn to Anatole Kuragin (Vittorio Gassman), a womanizer. Pierre saves Natasha by telling her of Anatole's past before she can elope with him. Napoleon invades Russia. Pierre visits Andrei on the eve of the battle, and observes the battle that follows. Traumatized by the carnage, he vows to kill Napoleon. Written by alfiehitchie