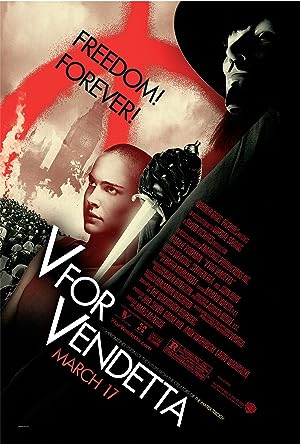 In the year 1998 , Evey Hammond is an average citizen of the United Kingdom, which is under the rule of the fascist and tyrannical Norsefire Party. She is an employee of the state-run British Television Network, but soon, she becomes the number one enemy of the state together with an enigmatic and larger-than-life freedom fighter known only by the letter "V". V informs Evey that she must hide in his underground lair for at least one year, and while she is reluctant to the idea at first, a bond soon forms between the two individuals. In the meanwhile, the mysterious past of V is gradually revealed to the police inspector tasked with capturing him, Eric Finch, and it is not long until he starts questioning everything his government stands for. Written by goddangwatir