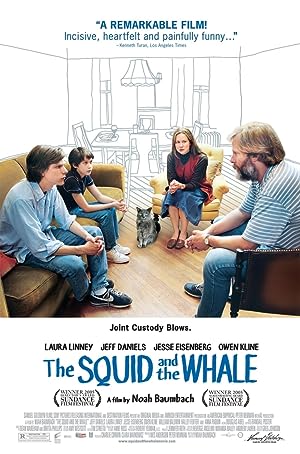 In 1986, In Brooklyn, New York, the dysfunctional family of pseudo intellectuals composed by the university professor Bernard and the prominent writer Joan split. Bernard is a selfish, cheap and jealous decadent writer that rationalizes every attitude in his family and life and does not accept "philistines" - people that do not read books or watch movies, while the unfaithful Joan is growing as a writer and has no problems with "philistines". Their sons, the teenager Walt and the boy Frank, feel the separation and take side: Walt stays with Bernard, and Frank with Joan, and both are affected with abnormal behaviors. Frank drinks booze and smears with sperm the books in the library and a locker in the dress room of his school. The messed-up and insecure Walt uses Roger Water's song "Hey You" in a festival as if it was of his own, and breaks up with his girlfriend Sophie. Meanwhile Joan has an affair with Frank's tennis teacher Ivan and Bernard with his student Lili. Written by Claudio Carvalho, Rio de Janeiro, Brazil