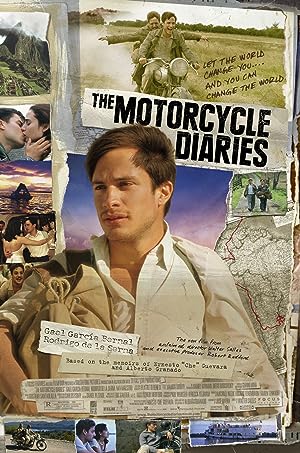 In 1952, twenty-three year old medical student Ernesto Guevara de la Serna - Fuser to his friends and later better known as 'Ernesto Che Guevara' - one semester away from graduation, decides to postpone his last semester to accompany his twenty-nine year old biochemist friend 'Alberto Granado' - Mial to his friends - on his four month, 8,000 km long dream motorcycle trip throughout South America starting from their home in Buenos Aires. Their quest is to see things they've only read about in books about the continent on which they live, and to finish that quest on Alberto's thirtieth birthday on the other side of the continent in the Guajira Peninsula in Venezuela. Not all on this trip goes according to their rough plan due to a broken down motorbike, a continual lack of money (they often stretching the truth to gain the favor of a variety of strangers to help them), arguments between the two in their frequent isolation solely with each other, their raging libidos which sometimes get them into trouble, and dealing with Fuser's chronic asthma. But a chance encounter with a couple of Communists in the Chilean desert and an extended visit to the San Pablo Leper Colony in the Perúvian Amazon Basin among other things profoundly affects what each will want to do with his life and the bond each has with the other. Written by Huggo

The Girl with All the Gifts (2016) : เชื้อนรกล้างซอมบี้