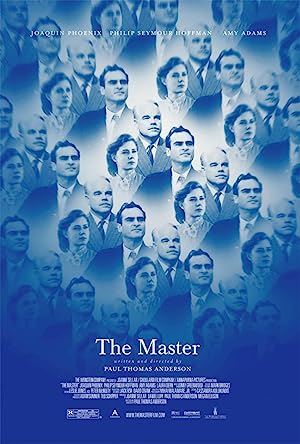 Following his discharge from the US Navy after WWII, Freddie Quell is having difficulties adjusting to non-military life partly due to his war experiences in the tropics. He has a violent temper. He is obsessed with sex, which is partly why he can't and won't commit to his teenaged girlfriend, Doris Solstad. And he is an alcoholic, drinking primarily concoctions he creates himself with dangerous ingredients. It is these factors in combination that lead to him being fired from one job after another, from department store portrait photographer to cabbage picker. Wandering one night in 1950 while drunk, he stumbles upon a yacht being used by Lancaster and Peggy Dodd, the yacht aboard which their daughter Elizabeth will get married. Feeling a connection to the stranger, Lancaster invites Freddie to stay aboard to work. In addition to that work, Lancaster indoctrinates him into his cult, named the Cause, which purports to do things as varied as cure serious maladies and create world peace. Peggy, Elizabeth and Elizabeth's husband Clark all subscribe to and support Lancaster's teachings. The only one of the Dodd family that doesn't is Lancaster and Peggy's son, Val Dodd, who believes his father is just making things up as he goes along. Because of being lost psychologically, Freddie is easy prey, he who is looking for something or someone to guide him to a higher plane. But as Freddie travels with the Dodd family as they spout the gospel, he and the Dodds may become at odds with each other if Freddie cannot or does not find from them and the Cause what he needs in life to survive emotionally. Written by Huggo