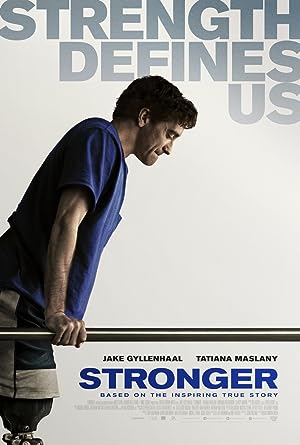 Jeff Bauman is a well-intention-ed but underachieving Boston native who works at the deli counter of a Costco and lives in a small two-bedroom apartment with his alcoholic mother, Patty. One day at the local bar, Jeff runs into his ex-girlfriend Erin, who is attracted to his kindness and charm but finds herself constantly frustrated by his lack of commitment. After learning that Erin is running in the Boston Marathon to raise money for the hospital she works at, Jeff asks every patron in the bar to donate and then promises Erin he'll wait at the finish line for her with a big sign. The day of the Marathon, Jeff scrambles to make it to the finish line on time but reaches it just before Erin reaches the finish line. As she approaches a bomb goes off right where Jeff is standing. After being rushed to a hospital, both of Jeff's legs are amputated above the knee. When he regains consciousness, Jeff tells his brother that he saw the bomber before the explosion. Patty calls the FBI, and Jeff is able to give them a description of Tamerlan Tsarnaev. Local authorities capture Dzhokhar Tsarnaev days later, and Jeff is hailed as a hero.