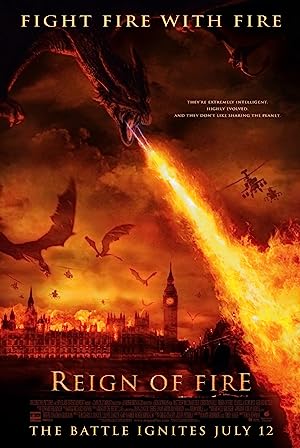 In present-day London, 12-year-old Quinn Abercromby witnesses the awakening of a hibernating dragon from a centuries-long slumber, the result of a construction dig supervised by his mother and an incident for which Quinn feels partially responsible. Twenty years later, the adult Quinn (Christian Bale) is the fire chief of a refortified castle community, responsible for dousing the blazes lit by the dragon's prodigious number of flame-spewing offspring, airborne juggernauts that have wreaked havoc across the globe, torching civilization and turning humans into an endangered species. Hope arrives in the form of Denton "Dragon Slayer" Van Zan (Matthew McConaughey), an American known to be the only man to ever kill one of the dragons, and Alex (Izabella Scorupco), a scientist/pilot who's a member of Van Zan's army, a zealous fighting force that includes a secret weapon: the Archangels, paratroopers using themselves as bait to attract and then dispatch the deadly beasts.