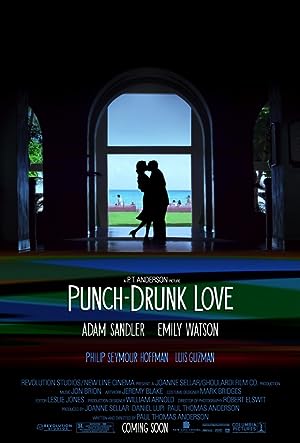 Barry Egan hates himself and hates his life. The only male among eight siblings, Barry is treated poorly by his overbearing sisters. Despite owning his own business, he has gotten nowhere in life largely because of his insecurities. He leads a solitary life, which allows him to hide his violent outbursts that occur when he's frustrated. His solitude however allows him to think, he stumbling upon a scheme to travel the world on a pittance, travel which he has never done. Concurrently, he meets two people who pull him in two different directions. The first is Lena Leonard, a friend of his sister Elizabeth. Barry is slow to realize that Lena is attracted to him, he making her make all the first moves. Lena is eventually able to get Barry out of his shell, she who sticks around despite his obvious problems. His burgeoning relationship and thus new life with Lena is threatened by the second, "Georgia", who he contacted in an effort to alleviate his loneliness. Georgia and her "band of brothers" do whatever they can get get out of Barry what they want, no matter the price to Barry. Written by Huggo