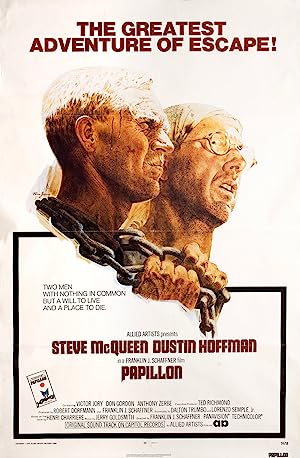 A semi-fictional account of Henri Charrière's time in the penal system in French Guyana - some of it spent on infamous Devil's Island - is presented. It's the early 1930s. Charrière - nicknamed Papillon because of his butterfly tattoo - and Louis Dega are two among many who have been convicted in the French judicial system, they now being transferred to French Guyana where they will serve their time, never to return to France even if they are ever released. A safe-cracker by criminal profession, Papillon is serving a life sentence for murdering a pimp, a crime for which he adamantly states he was framed. Dega is a wealthy counterfeiter, who expects his well-to-do wife eventually to get him released. At Papillon's initiative, the duo enters into a business arrangement: Papillon will provide protection for Dega, who, in turn, will finance Papillon's escape attempt. As the two men spend more time together than either had expected, their burgeoning friendship ends up being an important factor altering their original plans, needed as they work with and against others who are trying to achieve their own goals, sometime conflicting with those of Papillon and Dega. Written by Huggo/RMS