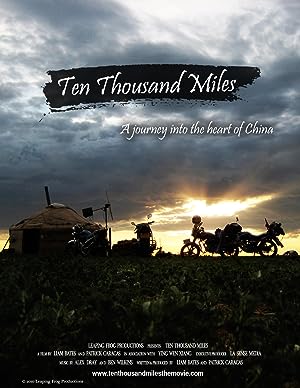 Gesang Duojie, a shy 19-year-old Tibetan, has never left his farming village. Abruptly, at his mother's behest, he climbs onto the back of a small motorbike to see the world, May 4, 2009, traveling 8,000km with two men in their early 20s he doesn't know, one from Eastern China, the other from Switzerland, and their friend, a Brazilian cinematographer. Authorities, monks, students and gangsters will join near-death experiences to challenge the foursome's will and outlook on life in Ten Thousand Miles. They bump and wheel, initially a biker's road dream until disasters strike, across vast stretches of icy, snowy spring Himalayas from the religious center of Tibet, Lhasa, through earthquake-ravaged Sichuan to the lightning-rich deserts of Inner Mongolia, dazed at the end by the beat of China's commercial heart, Shanghai, dense with skyscrapers. Ten Thousand Miles is more than just a high-adventure road trip, though: it offers a very rare opportunity to hear the voices of China's coming-of-age adults. The adventurers continually interview young people in remote villages, then bustling urban centers, asking them about their hopes for the future and their dreams, their views of the world. Farmers, gangsters, nomads, musicians and wealthy business people form a vivid tapestry but also give voice to a society that is a key player in 21st century Asia. Woven throughout the story is the rich thread of how the travelers are reshaped by both the dramas and the ordinary people they meet. Written by Anonymous