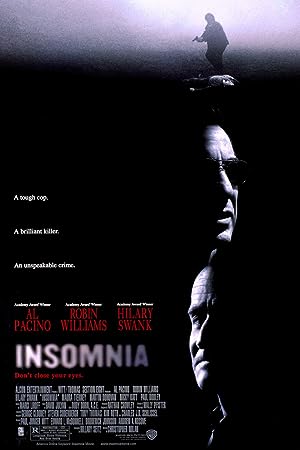 In Nightmute, Alaska, seventeen year old resident Kay Connell is found murdered. As a favor to the local Nightmute police chief, two Los Angeles Robbery Homicide police detectives, Will Dormer and Hap Eckhart, are called in to assist in the investigation. Although renowned in the police world, both Dormer and Eckhart are facing some professional issues back in Los Angeles. In Nightmute, Dormer has a major case of insomnia due to a combination of the incessant midnight sun and from a secret he is carrying. This insomnia is causing him to be delusional. Something he is not dreaming about is that the murderer has contacted him, informing him all about the murder and the fact that he knows everything that is going on with Dormer. They begin a symbiotic relationship in keeping secrets for each individual's benefit. But ambitious young local detective, Ellie Burr, might piece the story together on her own. Written by Huggo