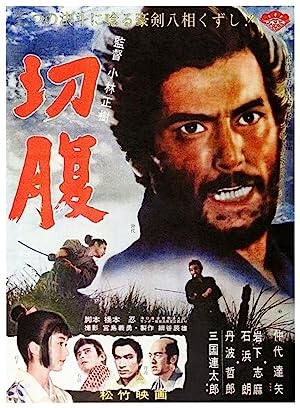 Peace in 17th-century Japan causes the Shogunate's breakup of warrior clans, throwing thousands of samurai out of work and into poverty. An honorable end to such fate under the samurai code is ritual suicide, or hara-kiri (self-inflicted disembowelment). An elder warrior, Hanshiro Tsugumo (Tatsuya Nakadai) seeks admittance to the house of a feudal lord to commit the act. There, he learns of the fate of his son-in-law, a young samurai who sought work at the house but was instead barbarically forced to commit traditional hara-kiri in an excruciating manner with a dull bamboo blade. In flashbacks the samurai tells the tragic story of his son-in-law, and how he was forced to sell his real sword to support his sick wife and child. Tsugumo thus sets in motion a tense showdown of revenge against the house. Written by Kevin Rayburn