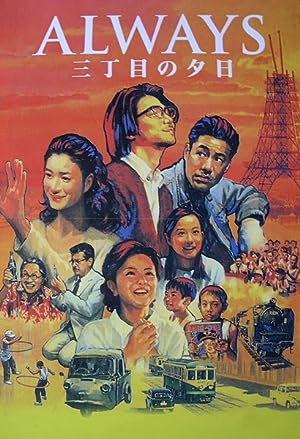 Leaving her provincial home, teenage Mutsuko arrives in Tokyo by train to take a job in a major automotive company but finds that she is employed by a small auto repair shop owned by Norifumi Suzuki. Suzuki's hair-trigger temper is held somewhat in check by the motherly instincts of his wife, Tomoe, and his young son Ippei immediately bonds with Mutsuko as if she were his older sister. The Suzuki shop lies almost in the shadow of the Tokyo Tower as it rises steadily above the skyline during construction in 1958. Others in the neighborhood also are striving to better themselves as Japan continues to emerge from the shadow of war. Hiromi has just abandoned her shady life as a dancer to start a sake bar. Abandoned by his single mother, young Junnosuke is first handed off to Hiromi but she passes him off to Ryunosuke Chagawa, a struggling writer who runs a candy shop and only manages to sell adventure stories for boys as his serious novels continue to be rejected. Junnosuke is an avid reader of Chagawa's stories and begins to idolize him upon learning about his authorship. Junnosuke also writes stories, and makes friends with Ippei and others when they discover his tales that show Japan in the hi-tech future of the 21st century. Written by Brian Greenhalgh