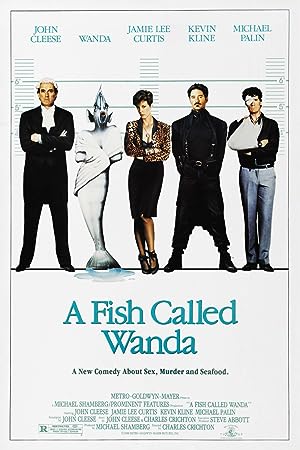 In London, Georges Thomason (Tom Georgeson), his seductive American girlfriend Wanda Gershwitz (Jamie Lee Curtis), and their associate Ken Pile (Sir Michael Palin) are planning their latest crime, a diamond heist that should net them thirteen million pounds sterling. They plan on leaving the country with the goods after the heist. On Wanda's recommendation, they enlist the help of her brother, Otto West (Kevin Kline), a weapons expert, for this heist. In reality, Otto is not Wanda's brother, but her latest lover, a dimwit who gets off on his own body odor, who believes he's an intellectual because he reads Nietzsche, and who does not tolerate being called stupid by anyone. Wanda has one weakness in men which is how Otto was able to get her to be his lover: speaking Italian in seduction. Wanda and Otto plan to double cross Georges by having him arrested for the heist, while they abscond with the jewels. Wanda further plans to triple cross Otto by eliminating him from the picture after she has the jewels. They are able to get Georges arrested with him not knowing who tipped the Police off, in the process, Georges being implicated by an elderly eyewitness named Eileen Coady (Patricia Hayes). With Georges in jail, Wanda and Otto discover that he in turn has protected his investment by moving the jewels from their agreed location to a hidden one, he not telling anyone except Ken some hint of where they are. Ken, an animal lover with an extreme stuttering problem, is given a task by Georges: kill Mrs. Coady before she is able to testify against him, as she is the crown's primary witness. Meanwhile, Wanda has a plan of her own to reach her end goal: seduce George's defense lawyer, Archie Leach (John Cleese), and find out any and all of Georges' secrets concerning the heist, including the location of the jewels. Archie may be easy prey for Wanda's seduction, as his wife, Wendy (Maria Aitken), is a self-absorbed woman who pays Archie little attention. Otto may throw a wrench into Wanda's plans if he finds out what she's doing, only feeling that she being solely his lover trumps all else. Written by Huggo